The dictionary definition for ‘Fascism’ is weak, inadequate and antiquated. In its’ many variant forms, Fascism is a mental and spiritual arrogance that oppresses any form of resistance in order to impose its’ narrow and exclusive power over a nation. This ‘variant’ can go beyond its’ original realm and become an aggressive force, expanding its’ ‘power and control’ agenda into other nations and cultures.
To exemplify this more ‘inclusive’ definition of Fascism, we need only look into recent global history. The rise of Hitler (in Germany), Mussolini (in Italy) and the Imperialism of Japan are examples of ‘variant’ forms of Fascism. Each had their own terminology, verbiage, focus of social issues, methods of controlling what the populous heard and thought; yet, the results were parallel, if not remarkably the same.
In all three examples, the essence of the planning agenda and approaches to gaining control of a society were essentially the same.
• Take advantage of strife or a crisis.
• Focus blame on specific groups or ideologies.
• Implant the preferred ideology into the education system.
• Use abstractions that appeal to emotions rather than rational reality.
• Avoid specificity.
• Divide the populous with a variety of issues as a device for incremental political control.
• Take advantage of the morally and intellectually weak by offering support and opportunities to compensate for their weaknesses.
• Design a monologue that creates the illusion of ‘entitlement’ and ‘exclusiveness’.
Of course, each above item could be a long commentary on why it is useful and how it is implemented.

Whether we want to admit it or not, Politics is a Religion and Religion is Politics. The two are inseparable and manifest in a variety of forms. For example, The Axis of WW2 (mentioned above) were three variant forms of Socialism. And, Socialism is always a variant of Fascism by whatever name it wants to call itself. “A rose is a rose by any name”….Shakespeare.
Adolph Hitler gained political control of Germany as a candidate running on the Democratic Socialist Party ticket. I here include a photo and quote from one of his campaign speeches. 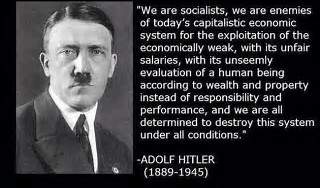 Of course, as anyone who is the slightest bit aware of real history, knows this was a total lie. Yet, it had appeal at the time and circumstances within Germany. The reality was that the Nazi party (the Democratic Socialist Party) took control of industry, education, the media and virtually all personal and social conduct. It introduced slave labor, inscription for its’ military expansion and conquests. It murdered millions of minorities and what it considered undesirable and inferior humans.
As we look at the present day in America and elsewhere these circumstance and events are revealing their evils again. In America, for example, the preparations for this fascist take-over have been in the making since 1965 with Johnsons’ ‘Great Society Agenda’. The ‘checklist’ has been followed to the letter and now manifesting.

As noted at the beginning of this commentary, politics and religion are inseparable. To be authentic and honorable with these commentaries is the essence of motivation for their existence. Therefore, our spiritual nature and how we use it well for ourselves and our fellow humanity must always include the very things we pretend to exclude from our conversations. How absurd and full of denial can we get?!
Stay tuned to these commentaries as they will provide insights, perspectives, real facts of our most distant and most recent history, messages from the ‘Visitors’, personal items most useful in your time on this fine planet.
No issue of reality will be off-limits.
Clay

<<< To print this article or download it as a PDF, just click on the printer icon in the bar on the left-hand side of the screen.

Sign up to receive the latest posts as soon as they're published, plus other interesting news.

We've sent you an email so you can confirm that you want to receive updates from us. If you don't see it, check your spam folder. Once you've clicked the link, you're in!

Your information will *never* be shared or sold to a third party.

“Sometimes we confront something not within our common categories.  Do I see Kahil Gibran or Walt Whitman?  Is it the romantic or mystical poet?  Whether prose or poetry, he finds his own place yet is in the reader’s soul. Jim Whitehead. University of Arkansas Department of Literature.

“Thank you for your friendship, youthful counsel and those moments when our minds worked its mysteries.  As a clinical minded man it is not often I see such empathetic depth in the poet.  I see this in you.” Harold Sherman. Founder of the Foundation for Psychic Research and Physic Healing.

“Being a good soldier and a good soul with the essential audacity and tenderness the world needs is a rare event.  To live with the burden of service yet with the burden of confidentiality is often more than one can bear.  Clay has my salute.” Jim Tatum West Point

“I will be with you always as your path prepares you for useful things.  It is a pleasure to be with you in these moments of The World Council of Religions. Our higher soul is with us and there will be light to guide us to a world of peace. To this, never waiver, my brother.” Kirpal Singh Ji. Founder of the World Council of Religions.   Master of the Sikhs.

Thanks for the opportunity to read The Universal Infidel. I’m right there with you on the necessity of letting go of much of our religious heritage in order to experience true enlightenments. Keep putting this message out into the world. We need to hear it again and again.

“It’s difficult to imagine you as a minister as you seem so ‘average’ and unassuming.  Your time and effort with the children at Hagen House inspires me and keeps my faith in good works.” Thor Hagen.  Retired wrestler and founder of the Hagen House for Homeless Kids.  K.C., Missouri.